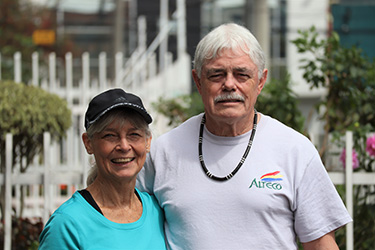 As founders of ALTECO, and facilitators of the Three Waves Movement across the Amazon region of South America, Paul & Robin are grateful for the privilege of watching God bless this movement since its inception.

Paul served in the dual role of President of ALTECO and CEO of Amazon Focus from the founding of both entities until recently when he stepped back from hands-on management to “open up space” for younger leaders. Paul and Robin find great joy in accompanying these new leaders as they carry this Movement to the next level.

Currently Paul continues to serve on the ALTECO Board, and as a Strategic Consultant for ALTECO and the “ETO Team,” which leads the “Three Waves Movement” across the Amazon & Lowlands of South America.

Together Paul & Robin are passionate about inspiring and challenging the Bride of Christ, the Church, in both South and North America. Endeavoring to harness the wisdom and insights learned from the Amazon, they’re currently engaged in writing and publishing stories of God’s faithfulness throughout their lifetime, producing challenge music, and sharing thought-provoking Biblical paradigm shifts in global mission.

Paul & Robin proudly claim as their own, the three amazing spouses of their three children, and greatly enjoy spending time with their nine grandchildren.

Life verse: Romans 15:20 “It has always been my ambition to preach the gospel where Christ was not known, so that I would not be building on someone else’s foundation. Rather, as it is written: ‘Those who were not told about him will see, and those who have not heard will understand.”

» Other ways to donate

with a credit/debit card using the online donation above.

Download our ACH Draft Authorization Form here and print and fill out and mail to our main office with a copy of a voided check attached.

Please make check payable to ALTECO and in the memo line you can note a specific missionary or General Fund.